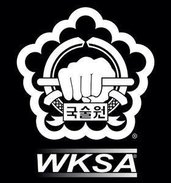 SBN Andy began training in Kuk Sool Won in 1997, after seeing a demonstration of the Korean martial art staged by KSW London (now KSW London South) in Dulwich.  He joined the club under the instruction of George Pelekanis and Dave Clarke, both now 4th degree black belts.  Andy enjoyed the challenge, the hard work and discipline as well as the hugely varied and well-structured syllabus.  Training partners back then included Matt Boniwell (now KJN and lead instructor to Ireland!).

1998 saw Andy’s first tournament, as a yellow belt, at which he won his first medal, a fourth place in sparring. SBN Andy attended his first seminar that year too, held in Crystal Palace with Kuk Sa Nim and KJNs Marlin Sims, Philip Holmes, John Ives and Richard Roper.  He recalls both the tremendous skill of those Masters, and the friendly and welcoming nature with which they taught everyone, even the beginners like him!

SBN Andy has attended seminars, workshops, demonstrations and tournaments every year since 1998 and the atmosphere has never been less than brilliant in all that time.

Anyway, Andy kept training, sweating and studying and competing in tournaments (winning another 2 fourth place medals in sparring and staff along the way) and in 2001 achieved the rank of 1st degree black belt, Jo Kyo Nim, at the UK Tournament in Norwich.  He then did the line judges’ course and started refereeing at tournaments, something he has enjoyed very much ever since.  As a JKN Andy was asked to take over responsibility for one of the weekly sessions at KSW London. 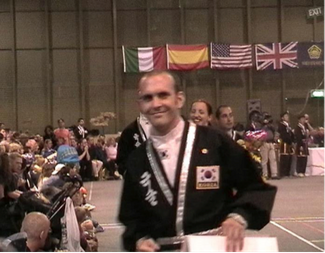 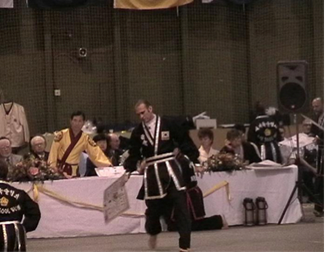 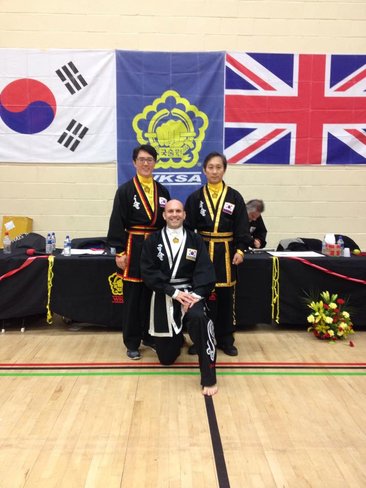 By 2004 Andy had reached 2nd degree, Kyo Sa Nim and continued to teach at and develop the London School.  Over the years there Andy considers himself privileged to have helped many students along their journeys through Kuk Sool, and says: “I was very proud each time any of them promoted, especially through the black belt ranks.  That 3 of those students are now 3rd dahns (PSBNs Josie and Laurence Misick and Martin Worsley) makes me very happy.”

A move out of London in 2008 and promotion to 3rd degree black belt (Pu Sa Bum Nim) in 2009 led Andy to apply to WKSA HQ to start his own Kuk Sool Won School in Sevenoaks, Kent.  The school started with 3 students at the Sevenoaks School, but later had to move to Dunton Green to enable more classes to run to accommodate all the students!  We make great use of the outside space there whenever the weather allows. Andy then passed the course to become a centre judge at WKSA Tournaments under the guidance of KJN Darren Brown in Kings Lynn.

Andy then began training with PKJN Nick Reeve and testing towards 4th degree black belt.  “I love training with Master Nick,” said SBN Andy.  “His knowledge and skill are humbling and inspiring, and his manner, humour and outlook are welcoming and encouraging.”

After a break from competing for 8 years (due to injury, family commitments and a need to focus on his own students) Andy was lured back onto the tournament mats by PSBN Martin in Norwich 2013, where he won a bronze medal for breaking in the 3rd dahn competition.  Since then Andy has managed to win another 4th place (copper) medal for breaking, 5 bronze medals (open hand forms twice, 2 different weapons forms, and techniques) and 2 silvers (techniques and sparring).  He was especially pleased to have his young daughter win a silver in forms, and two KSW Sevenoaks Students collect gold medals at sparring and forms in the European Tournament in 2016, the first gold medals for the club.

In 2014 Andy’s old instructor and training partner (then SBN) Matt was asked to host a seminar in Ireland, and Andy jumped at the chance to tag along.  “It was excellent to spend time with SSKJN Sung Jin Suh, PKJNs Nick and Richard Morgan-Jones as well as SBN Matt and his family and students in the beautiful town of Kinsale, Cork,” said Andy.  “It’s a beautiful place, and everyone was very welcoming.”

Andy has taken part demonstrations in Cork, Sevenoaks, Cambridge, Kings Lynn, Norwich, Bromley, London, Eastbourne and elsewhere in the UK.  He was part of the KSW demo team for the Combat and Strength Show, and the special event to mark SIKJN Philip Holmes’ 50 years in martial arts. 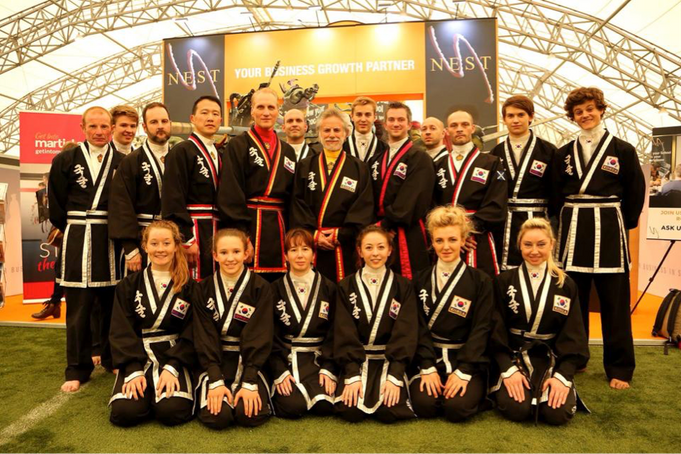 As KSW Sevenoaks has grown and developed, Andy has greatly enjoyed helping his students to progress.  Andy’s favourite thing in Kuk Sool is to help people realise that they can do those things they thought were beyond them.  Whether that is learning a new technique, a new weapon, a form or competing.  He also really enjoys the sense of family within the Kuk Sool Won community, worldwide.  Andy says: “I have met some fantastic people over the 19 years (and counting) I’ve been involved with KSW, and made some great friends along the way, from all over the world.”

2016 is a big year for us at Sevenoaks: at the European Tournament in June, two students, Misli and Jansin Bilal, promoted to JKN; Brian Riddle promoted to KSN and of course Andy promoted to 4th degree, Sa Bum Nim.  Later in the year, we expect another JKN and a PSBN (3rd degree). 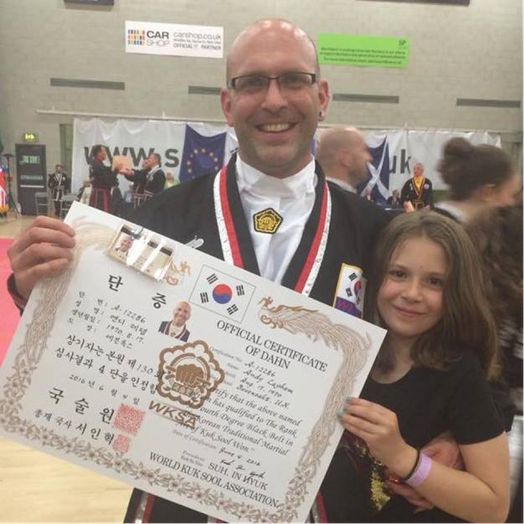